To start using Automated Data Distribution (ADD), do the following:

The output stage contains objects serving as a data source for populating data into workspaces.

In GoodData, terms workspace and project denote the same entity. For example, project ID is exactly the same as workspace ID. See Find the Workspace ID.

To configure the output stage, use the following gray page:

Configure the following parameters for the output stage:

The Output Stage parameter is a URI pointing to the schema in the Data Warehouse instance that represents the output stage.

If Data Warehouse URI is the following:

then the default schema URI would be the following:

The Client ID parameter identifies data records related to a particular workspace. This is an optional parameter.

Each workspace can have only one Client ID specified.

The Client ID parameter can be up to 255 characters long and can contain only the following characters:

The Client ID parameter must be unique within a data product.

We recommend that you use the same Data Warehouse instance as an output stage for a group of workspaces in the same domain. The Client ID parameter is used to determine which data records are related to which workspace. The value of the Client ID parameter is specified in the x__client_id column. When data is loaded to a particular workspace, only data with the corresponding value of the x__client_id column is loaded to this workspace.

The following picture shows a situation where there are records in the output stage table holding information related to a few workspaces in a segment or even a domain. When the data is loaded to a workspace where a certain value of Client ID is set, only the records whose value in the x__client_id column matches the workspace's Client ID parameter are loaded into the workspace. 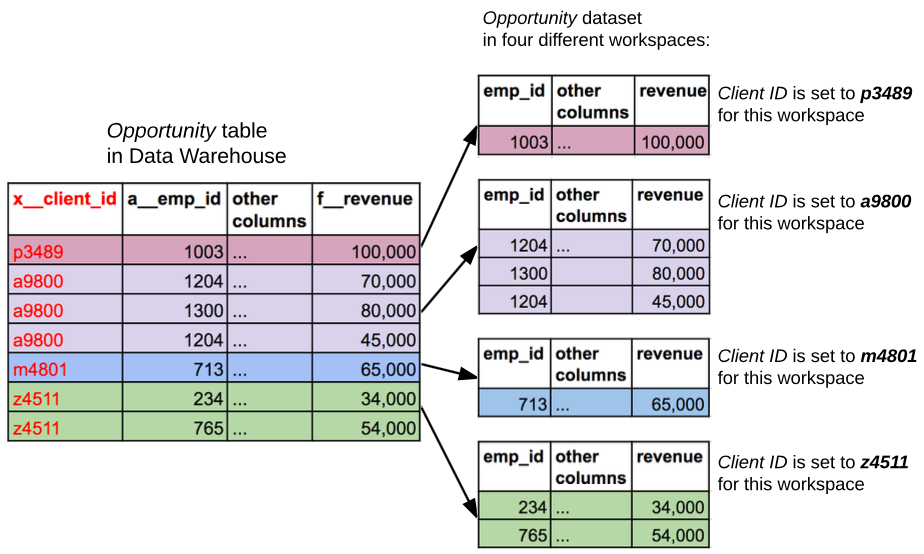 The Output Stage Prefix parameter is a prefix that identifies all output stage objects and distinguishes them from the objects in other logical areas (input stage, persistent stage) of Data Warehouse. This is an optional parameter.

Imagine a business entity (for example, Opportunity) that has its database objects in all three logical areas of Data Warehouse. With no schema support, you have to use prefixes for distinguishing these objects. For the Opportunity business object, you can use In_Opportunity, P_Opportunity and Out_Opportunity tables in the input stage, persistent stage, and the output stage correspondingly.

Let's say you have a dataset called Opportunity (with dataset.opportunity as its LDM identifier) in the logical data model in your workspace. The corresponding output stage object would be opportunity.

However, if you are using prefixes for distinguishing database objects in different logical areas of Data Warehouse, you can use out_opportunity instead.

In this case, the Output Stage Prefix parameter is set to out_ . This prefix will be removed from the object name when matching dataset.opportunity and out_opportunity.

Use the SQL Diff

In the database client that you are using, execute the generated commands on top of your Data Warehouse instance mapped as an output stage.

To check that the commands completed successfully, re-run the SQL commands. The returned results should indicate that the workspace LDM and the output stage objects match.

This may also help: